If you look closely at my resume, you may find a political science degree. I haven’t had much use for it since I left hard news for features, and eventually arts journalism, after the disastrous election night of 1980. But this month I’ve had a refresher course.

Carl Bernstein, half of the Washington Post reporting team that broke the Watergate story, was to speak in the Distinguished Lecturer Series at William Paterson University in Wayne, N.J., where my friend Dr. Phillip K. Sprayberry is media relations coordinator. Having accompanied me to Judith Ivey’s one-woman show on Martha Mitchell some years ago, Phillip knew of my Watergate fixation and booked me to be, essentially, the prep for Bernstein in two classes that required attendance at his talk. 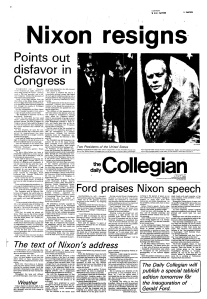 Surely I must have been the biggest Watergate junkie at Penn State. The scandal broke two days after I graduated from high school and continued to unfold in the years I was cutting my journalistic teeth at The Daily Collegian. (I’ve previously written about Richard Nixon’s resignation during my year as editor in The Collegian Chronicles, a 2006 history of the university as seen through the lens of the newspaper.) In S.A.T. parlance, Watergate : me :: football : everybody else at Penn State. In another context, it could be considered my grassy knoll.

But 40 years had passed, and I found myself as much in need of review as the students were in need of introduction. “How much will they know about Watergate?” I asked Phillip. He guessed that they might vaguely have heard of it, possibly as the reason every political scandal now carries the suffix -gate,  and could probably identify Nixon as a former President of the United States. So Watergate : them :: World War II : me at their age. One can only wonder, as he lies dying in South Dakota, if they had even heard of Nixon’s opponent that year, George McGovern — “McG” in Collegian headlines.

So I reread “All the President’s Men,” Bob Woodard and Carl Bernstein’s book recounting how they got that story. I was surprised to find it hard slogging – an incredibly detailed, convoluted tale of politics gone wrong. I remembered the book as fast-paced and crystal-clear, but that was in 1973, when I could hear any of the dozens of names in the White House rogues’ gallery and immediately rattle off their titles and their crimes. Now it was hard to distinguish John Ehrlichman from E. Howard Hunt, John Dean from Hugh Sloan, and to follow not only the money, as Woodstein did, but even the basic who, what, when, where and why. Still, the memories trickled back: what John Mitchell said about Katharine Graham (hint: it involves a wringer); the expletives deleted; the shock of the Saturday Night Massacre; Woodward’s cloak-and-dagger meetings with Deep Throat. Certain passages have taken on an entirely new meaning since Deep Throat was identified in 2005 as W.  Mark Felt, associate director of the F.B.I., who may have been motivated, at least in part, by revenge for being passed over for the directorship.

I boiled down two and a quarter years, from  “third-rate burglary” to “our long national nightmare is over,” into 27 PowerPoint slides and 90 minutes. (Attention spans aren’t what they used to be.) Par for any college course, some students almost got it, but not quite, and some probably couldn’t have cared less. But at least two could relate to the closing line of my assessment of Watergate’s impact on the press, which still chokes me up: “It inspired a whole generation of young journalists. We all wanted to be Woodward and Bernstein.”

Those two came up to me afterwards: a boy who said he had wanted to be a sportswriter but was becoming more interested in politics, and a girl whose goal is to be an investigative reporter. She fretted over the obvious question: will there be any market for investigative journalists when her time comes? “Of course,” I assured her, repeating my answer whenever someone, generally an old-timer, says this must be a terrible time for young people starting out in journalism: “No, it’s a very good time to be starting out. It’s just not our journalism.”

Near the end of the talk, I speculated about how Watergate might be covered if the story were breaking today. Data-driven journalism?  Maybe. I’m still figuring out what that is, but an adjunct instructor I met yesterday at the CUNY Graduate School of Journalism, where I’m coaching the international students this semester, agreed it might be an option in tracking, say, campaign contributions and spending — crucial to Watergate. And all those scoops we couldn’t wait to read in the next day’s paper? They’d be published instantly, in 140-character bursts on Twitter.

Which brought me to the newsroom of CUNY’s New York City News Service on the night of the first Obama-Romney debate. I had already decided to be there, thinking it would be fun to watch the debate in a newsroom full of journalism students. Then I heard the evening was being billed as “Tweet and Eat” — a pizza party (you can’t cover an election without pizza)  with live tweeting as an exercise in journalism. “The idea,” wrote Professor Jere Hester, “is to use Twitter to add to the conversation in two important ways: providing near-instant fact checking, via links to solid news sources and documents, and posing follow-up questions that too often do not get asked during such debates.”

Four short years ago, Barack Obama was hailed as a pioneer just for using the Internet as a campaign tool; this time, preparatory reading on Politico.com predicted that “The Debate Will Be Decided on Twitter.”  “I guess Twitter just seems natural for my generation,” said Corrie Lacey, a student who interviewed me for the CUNY newsletter just before the debate. Though I do have a Twitter account, set up so I could grade final exams and projects in Vancouver (Finals, April 2), I’m not much of a tweeter. When I do tweet, it tends to be as an outlet where my snarkiness can fly under the radar, seeing as I have only 11 followers, and one of them is a website.

On this night I found myself paralyzed. I couldn’t get into my Twitter account; the password had apparently been hacked when I wasn’t looking. (My camera also died that night, making me wonder if Mercury hadn’t gone retrograde early.) But I followed the conversation  on screens around the newsroom at #CunyDB8Watch.

Dozens of students congregated, most around a very long cluster of tables. I sat on the fringes near two of my clients, Michiko from Japan and Ezra from Belgium; Dominik from Austria was tweeting from elsewhere in the room.  MacBooks at the ready, they were all gazing at one screen or another — half watching the TV monitors, half intent on their laptops, and not just the Twitter page. I cleaned out my e-mail at a desktop as I listened with one ear.  When you’ve been through as many election cycles as I have — some on news desks, some as a private citizen — you’ve heard it all before.

The moderator, Jim Lehrer, said at the outset that there was to be no noise or reaction from the audience in Denver,  but in the newsroom there were cries of “Fact-check that!” — for example, when Mitt Romney said that “my state” (Massachusetts, where some voters still consider him a carpetbagger) had the top schools in the nation. Tom DiChristopher (@tdichristopher) took on a health-care issue: “Romney: 3/4 of employers won’t hire because of Obamacare. That came from an opt-in, online survey.” Others comments on the debate overall. “So much smirking. Can’t they just look normal while they wait for the other to finish?” wrote Peter Moskowitz (@PeterMoskowitz). A French student, Charles Pellegrin (@ChPilgrim), added, “In brief, a pretty cordial debate. I’ll be the only 1 to make that comparison, but def more cordial than Sarkozy VS Hollande.”

When the debate ended, the pizza boxes were empty and the students started packing up immediately, having no stories to write on deadline. “I think it was awesome that we were trended in NY,” my Portuguese student, Sofia, e-mailed the next day. I asked the international students if they had any questions stemming from the debate. Michiko’s was cultural: “Obama and Romney both parenthetically talked about their families. I thought it is kind of perfunctory and unnecessary because it was a political debate. . . . What do you think about talking about families in occasions of business or talking to sources? Does it make sense?” No, I told her, but they have to do it anyway. It’s part of politics in America.

In subsequent debates, the students kept up the tweeting. I didn’t, except for a couple of snide comments on conservatives’ grammar. (For the record, I’m @DNwrites.) Otherwise, I reverted to private citizen/coach potato, reflecting on the difference between running for office and running a country. In political theater, there’s  performance — and then there’s performance.

One thought on “‘Gates and debates”