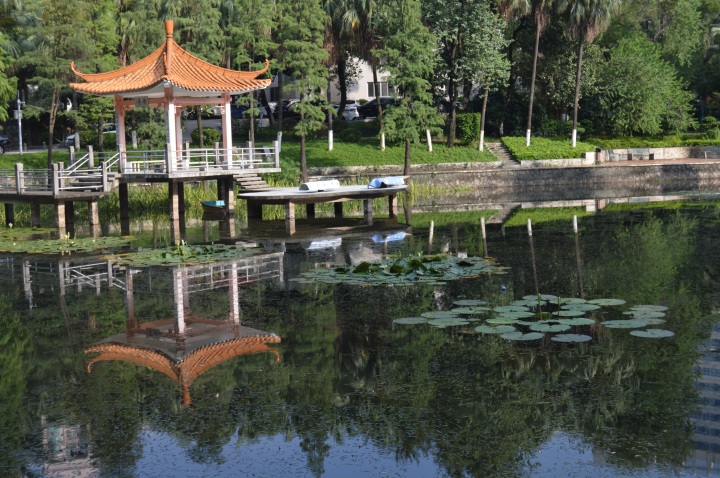 After two weeks, the “Fun Home” earworm has finally left my brain. (Sorry, Jeanine, Lisa and cast, but that’s what happens when you’ve ushered a musical for five months.) It’s been replaced by Rodgers and Hammerstein: “It’s a Darn Nice Campus,” from “Allegro.” That’s the tune I now hear in my head and hum as I explore Jinan University in Guangzhou.

There’s no ivy on the walls, but there are palm trees, a lily pond outside my door and lush greenery befitting the subtropical climate. (Humidity has averaged about 150 percent since I arrived.) Considering my experiences in Hunan five years ago (Monthly Archives, March to July 2010), my first week at Jinan has come as a very pleasant surprise.

Jinan University dates back to 1911, when China still had an emperor. Founded in Shanghai and reopened in Guangzhou after the 1949 revolution, it was the first university in China to recruit foreign students, according to Wikipedia (accessible via VPN), and its International School alone reported having had more than 3,500 as of spring 2013. (Last spring it hosted a group from the University of Louisville.) That school has nine programs taught in English, ranging from International Economics and Trade to Food Quality and Safety to International Journalism, which is where I come in. That program is a joint venture of the International School and Jinan’s School of Journalism and Communication, ranked as one of China’s top 10 by the China Academic Degrees and Graduate Education Development Center in 2013.

Jinan strikes me as an Asian twin of Columbia University, just four subways stops from home. (I’m told the subway station is diagonally across campus from me, but who needs the hassle when taxis are ridiculously cheap and stop five minutes from my door?) The main campus is a rectangle in the middle of Guangzhou, or at least it feels like the middle to someone who has barely begun to explore this sprawling city of 2,800 square miles and 14 million people. Its walls have three gates: the south or main gate, with its semicircular arch, and smaller, more utilitarian ones on the north and west, primarily for traffic control. The west gate is less imposing than Columbia’s wrought iron at Broadway and 116th Street, but it does open onto streets of shops and restaurants reminiscent of Morningside Heights, only busier. The imposing Main Teaching Building faces the imposing library across a plaza not unlike the Columbia quad. Like Columbia’s work in progress uptown, Jinan has a second campus north of ours; I will see it on Sunday, when I’ve been “invited” to be a guest speaker at freshman orientation.

Those who saw pictures of my apartment in Hunan may relax. (If you’re on my Snapfish list, don’t expect to see an album anytime soon. So far I’ve been unable to upload photos successfully.) The six-story Foreign Experts Residence reminds me of the apartment hotel where I’ve twice stayed in Shanghai. The living-room suite is massive, but here faux-leather teal upholstery cushions the wooden frames. The mosquito netting coiled over my bed like a fabric chandelier is too pretty to use, even though, living between the lily pond and a swimming pool, I’m covered with bites. The bathroom is real, with basin, tub and shower, as opposed to a toilet stall with showerhead. The kitchen is equipped with a working refrigerator and microwave oven, but no stovetop. Instead, it has a hot plate I haven’t yet figured out how to use, since the buttons are all labeled in Chinese. The eggs I bought a week ago sit in the fridge, awaiting instruction. The air conditioning is so efficient I have to turn it off frequently. There are washers on every floor and, as everywhere in China, a balcony for plein air drying.

About that swimming pool: there are two, actually, but I’m not allowed to use them until I pass a medical exam, scheduled for tomorrow morning, with results unlikely for another week. Given temperatures in the 90s and that humidity, I spent Labor Day weekend — which came early for me, with holidays Thursday and Friday for that big military parade in Beijing – exploring the pools at local hotels. I found two friendly Ramadas, one with a serviceable outdoor pool big enough for laps, the other with both an indoor pool (which may come in handy when the weather cools, as I’m told it will) and a resort-caliber amoeba-shaped outdoor pool with islands and a swim-up bar. Both are within range of a $3 cab ride. Another university just north of us also has two pools and apparently requires no health certificate. The outdoor Swimming Center was not admitting guests when I stopped by yesterday; the indoor pool was swarming with kids, and the ticket-seller refused to admit me unless I bought a latex swim cap from her, though my bag contained two Lycra ones. I took a walk instead.

Classrooms are comparable to those in Hunan, but in much better condition — and the technology actually works. Yesterday I shlepped my laptop to class in hopes of starting off my English News Writing course with a cautionary tale, the “Independent Lens” documentary on Jayson Blair, only to find the classroom computer could play my American-format DVD. (And it was quite a trip to see New York Times faces like Al Siegal, Bill Schmidt and Lena Williams in my classroom.) The campus restrooms may be be Asian and devoid of toilet paper, but they’re clean! And the International School provides an office and support staff.

Even on this smaller campus, I have yet to run into any of my students outside class. In Hunan I could scarcely turn a corner without hearing, “Hi, Diane!” or “Are you the new foreign teacher?” But there I had more than 200 students, and here just 24 so far. (In a week or so I’ll add a class of freshmen, about 30.) One only pedestrian, a man whose name I heard as Wujian, has accosted me on the street and walked me home to practice his English. But he did, as I recall, as if I liked Chinese food. Some things never change.